‘AMITYVILLE HORROR’ DIRECTOR SAYS HE WAS DUPED BY EX-WIFE

LOS ANGELES — The director of the “Amityville Horror” remake says he never suspected his ex-wife lied to him about being a dad — until his teen daughter raised the issue a year ago after reading questions about the paternity of Michael Jackson’s children.

“It was in the air this time last year,” Andrew Douglas told The Post at his home in LA.

Douglas says the blood tests he then took found a “zero percent” chance he was the biological father.

Since then, his ex-wife Ameena Meer has put him under a “cease and desist threat” that he believes bars him from communicating with the 17-year-old girl.

“I never had a chance to explain to her how our lives could be in the future,” he said.

Douglas sued Meer in Manhattan court this week to recoup $671,991 in child support he has paid over the years.

Meer responded: “He had 17 years to do paternity tests.” 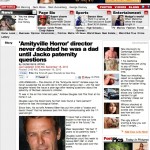