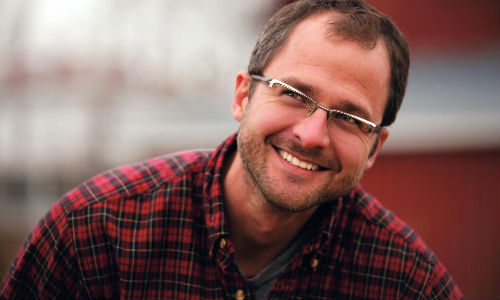 THINK OF THE ADAGE “DON’T JUDGE A BOOK BY ITS COVER” as you examine Josh Kilmer-Purcell’s memoir “I Am Not Myself These Days.” While you won’t see it, the reviewer’s copy featured a love quote from cause celebre and noted liar James Frey.

Skittish (or sensible, take your pick) publishers have replaced the quote with one by Simon Doonan, but the question remains—why should we believe any of them? “I Am Not Myself These Days” is packaged in a blue-and-white-striped cover with a picture of a goldfish in a bowl. Is it resting or is it drowning? Will it ever flap its way to the surface? Scan the pages and you will find that the picture is a metaphorical symbol of the author’s former life as a drag queen, alcoholic, and doting boyfriend to an abusive escort named Jack.

In a disclaimer, Kilmer-Purcell makes it very clear that he did not use any of his characters’ real names. But considering the torment “Jack” put him through, readers may wonder why not. “At one time I wanted to try crack and he very violently wouldn’t let me.”

Ten years, and the boyfriend/escort is gone. Where he is the author won’t say. Why Kilmer-Purcell chooses to cling to memories even after writing about them is a mystery. Memoirs are meant to be cathartic, but Kilmer-Purcell’s still living with all his old ghosts.

Before any judgments are made, here are a few observations: Kilmer-Purcell is an honest guy—so honest his book shocked his “very liberal” mother. Ask about whether sleeping with a hooker was a problem and he’ll tell you he didn’t mind sharing his ex-boyfriend with other clients, saying, “If you’re ashamed of your past, you’re ashamed of who you are today.” Observation two: This Michigan State grad is, deep down, very normal inside.

During a half-hour phone interview, the Upper Eastsider talks about how he likes to stay at home with his partner of five years. His new love seems at ease with the fact that Kilmer-Purcell will openly tell journalists, “I still love Jack.” Despite the trouble these words might bring into a stable relationship, Kilmer-Purcell’s words don’t come across as pretentious, just terrifyingly honest.

Bottom line: Josh Kilmer-Purcell is a good sport and a decent human being. Holding grudges is not his style. Things were a little different circa 1996, however. “I was a nice Midwestern boy. I came out relatively late, not until I was 22 or 23. “I was everything expected of me,” explains Josh.

Enter New York City. Enter Jack. Enter Aqua, Kilmer-Purcell’s drag-queen alter ego. Life changed and it changed violently. Kilmer-Purcell recalls, “Getting raped, beat up, waking up on the subway in drag without a shoe. Those are the things I wish I could forget.” Another one of those pauses in the conversation happens. Josh adds, “I was a slut.” Nonsense.

Naturally, the only solution was to quit. Aqua went back to being called Josh, put away the costumes, and resumed his life as an advertising exec. No more Aqua. No more Jack. No more partying. Josh let the memories sit. The heels were put away and reserved for special occasions like vacuuming. His stories were relegated to his computer. Then, a chance meeting on a plane with a producer. The producer hands the manuscript to bestselling author Clive Barker. Barker hands it to his editor at Harper Collins. The editor loves it. Barker options it for a movie. The book is published. You read this interview.

Barker isn’t the only famous author up Kilmer-Purcell’s sleeve. The other is James Frey, whose memoir “A Million Little Pieces” has been giving the publishing world a massive memoir hangover since the Smoking Gun Web site exposed fabrications in the book.

Initially, Fray’s quotes about how great “I Am Not Myself These Days” is peppered the front and back of the book. They’re gone now, but Kilmer-Purcell didn’t want to take the quotes off. “I used to say it would take Oprah [to bring Aqua back], but I’m not going anywhere near that,” the 36-year-old jokes, referring to how Fray’s book shot to the top of the bestseller charts after Oprah Winfrey chose A Million Little Pieces for her monthly book club and then was publicly excoriated by Ms. O. on national television after it was revealed that much of Fray’s addiction memoir was falsified.

Pressed for a Frey quote, Kilmer-Purcell says, “I think he said what he needed to say. Everyone’s already said way too much about him already. I have nothing revelatory to add—I believe a memoir is a self-portrait.” Kilmer-Purcell would rather talk about how James Baldwin inspires him and how the autobiographies of the various members of Andy Warhol’s Factory are a lot like his own memoir, but with questions about “truthiness” on every-one’s lips these days, he’s ready to talk about just how accurate a drag-queen memoir can be.

Kilmer-Purcell says he too, occasionally fudges reality in “I Am Not Myself These Days”: “If I don’t remember what I was wearing—then I recreate.”

The drag outfits, though, were always on point. Kilmer-Purcell casually adds he still hasn’t seen “Transamerica,” the movie where Felicity Huffman plays a pre-operative transsexual. Unfortunately, he sighs, that type of life is not for him, as he is very much himself these days.